“Kick the habit: A UN Guide to Climate Neutrality” 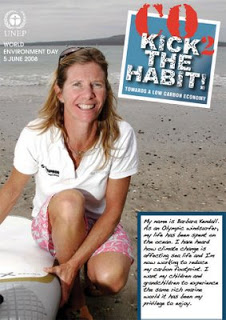 “KICK THE HABIT: A UN guide to Climate Neutrality”, edited in June 2008, is written by experts from many disciplines and various countries, with leading research organizations involved in preparing and reviewing the publication. It is aimed at a broad audience, and it presents solutions for individuals, businesses, cities and countries plus other groups that have similar characteristics such as NGO and intergovernmental organizations.
We don’t just burn carbon in the form of fossil fuels. Throughout the tropics, valuable forests are being felled for timber and making paper, for pasture and arable land and, increasingly, for plantations to supply a growing demand for biofuels. This further manifestation of our greenhouse gas habit is not only releasing vast amounts of CO2, it is destroying a valuable resource for absorbing atmospheric CO2, further contributing to climate change.
The cost will be borne by all. The poor will be hardest hit by weather-related disasters and by soaring price inflation for staple foods, but even the richest nations face the prospect of economic recession and a world in conflict over diminishing resources. Mitigating climate change, eradicating poverty and promoting economic and political stability all demand the same solution: we must kick the carbon habit.Adopting a climate-friendly lifestyle needn’t require drastic changes or major sacrifices. People in the developed world, as well as some rapidly developing countries and cities can start right away to “Kick the Co2 Habit”
In the Foreword, Ban Ki-moon, Secretary-General of the United Nations, says: “Addiction is a terrible thing. It consumes and controls us, makes us deny important truths and blinds us to the consequences of our actions. Our society is in the grip of a dangerous greenhouse gas habit.” 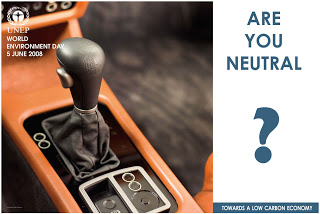 Just under half the emissions for which the individuals in developed countries are responsible come from things over which we have some control, for example how much we drive and fly and how we heat and power our homes. The rest arises indirectly from powering the places where we work, from maintaining public infrastructure and government, and during the production of the things we buy, including food. These are some of the factors that anyone will want to think about as they decide how to start their climate diet.
Some quite simple measures can more than halve the daily emissions of an individual, with even bigger cuts possible if sectors like power suppliers and automobile makers as well as aviation and appliance manufacturers contributed more to the greening of global lifestyles. For instance, replacing a 45-minute workout on a treadmill with a jog in a nearby park saves nearly 1 Kg of the main greenhouse gas, or choosing to dry clothes on a washing line versus a tumble dryer – a daily carbon diet of 2.3 Kg of CO2.
For individuals, there are carbon calculators who simplify compiling an inventory. Typically you will need to know your electricity consumption in kWh, how much and what kind of fuel you use to heat your water and warm the house, and how many kilometres you drive, fly and ride in different vehicles. You also need to decide the limits of the system you are concerned with, whether it is you as individuals, your household, or the company you work for.
The problem is urgent, and it affects almost every part of life. Something must be done. But what? And who should do it? Politicians? Absolutely. Business and industry? Certainly. Science and technology? Obviously. The United Nations? Of course. But if we really do want a changed world, it is useful to remember where to begin: be the change you want to see. It comes down to each one of us. No individual is going to make a scrap of difference. But millions of individuals together can make all the difference.
Download the complete Guide in pdf format here