René Aga 20 de enero de 2010 13 de febrero de 2017Construyendo capital humano, Sin categoría
(Press release from the World Economic Forum)
Geneva, Switzerland, 18 January 2010 – Over two-thirds of people believe the current economic crisis is also a crisis of ethics and values. But only 50% think universal values exist. These are among the findings of the World Economic Forum’s Faith and the Global Agenda: Values for the Post-Crisis Economy, an annual report on issues related to the role of faith in global affairs. 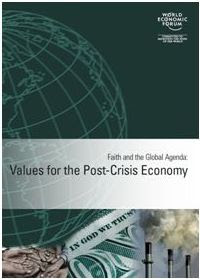 The report contains a unique new public opinion poll on values conducted through Facebook. The poll reached over 130,000 respondents in France, Germany, India, Indonesia, Israel, Mexico, Saudi Arabia, South Africa, Turkey and the United States.
The poll results point to a trust deficit regarding values in the business world. Only one-quarter of respondents believe that large, multinational businesses apply a values-driven approach to their sectors, while over 40% believe that small and medium-sized businesses apply such an approach.
Almost two-thirds of respondents believe that people do not apply the same values in their professional lives as they do in their private lives. When asked whether businesses should be primarily responsible to their shareholders, their employees, their clients and customers, or all three equally, almost half of the respondents chose the option of “all three equally”.
When asked to identify the values most important for the global political and economic system, almost 40% chose honesty, integrity and transparency; 24% chose others’ rights, dignity and views; 20% chose the impact of actions on the well-being of others and 17% chose preserving the environment.
Klaus Schwab, Founder and Executive Chairman of the World Economic Forum, said the report underlines the need for a set of values around which our global economic institutions and mechanisms of international cooperation must be built: “Our present system fails to meet its obligations to as many as 3 billion people in the world. Our civic, business and political cultures must be transformed if we are to close this gap. This is why the World Economic Forum is bringing world leaders representing all sectors of society together at the Annual Meeting in Davos-Klosters to rethink values underpinning the global system of cooperation.”
The report also compiles editorials on the topic of values for the post-crisis economy from over 15 global religious leaders and faith organizations, including Rowan Williams, Archbishop of Canterbury, United Kingdom; Reinhard Marx, Archbishop of Munich and Freising, Germany; Mohammad Khatami, President, Foundation for Dialogue Among Civilizations, and President of the Islamic Republic of Iran (1997-2005); Bartholomew I, Ecumenical Patriarch of Constantinople, Turkey; Ravi Shankar, Founder, Art of Living Foundation, India; David Rosen, Chief Rabbi and Director, American Jewish Committee (AJC), USA; and Yukei Matsunaga, President, Japan Buddhist Federation (JBF), Japan.
“We have to ask what an economy would look like if it were genuinely focused on making and sustaining a home – a social environment that offered security for citizens, including those who could not contribute in obvious ways to productive and profit-making business; an environment in which we felt free to forego the tempting fantasies of unlimited growth in exchange for the knowledge that we could hand on to our children and grandchildren a world: a social and material nexus of relations that would go on nourishing proper three-dimensional human beings – people whose family bonds, imaginative lives and capacity for mutual understanding and sympathy were regarded as every bit as important as their material prosperity,” said Rowan Williams, Archbishop of Canterbury, United Kingdom. The Archbishop will lead the closing session of the World Economic Forum Annual Meeting 2010 taking place next week in Davos-Klosters, Switzerland.
“The economic and financial crisis is an opportunity to re-articulate the values that should underpin our global institutions going forward,” said John J. DeGioia, President of Georgetown University, USA. “The world’s religious communities are critical repositories of those values.” The Report is produced in collaboration with Georgetown University.
Reed the full report and more at: http://www.weforum.org/faith