René Aga 03 de mayo de 2008 13 de febrero de 2017Construyendo capital humano, Sin categoría
Gaston Berger, father of the «prospective» or the study of the possible future, said that «The future is not only what can happen or what is most likely to occur. It is also in a growing proportion what we would have wanted it to be»
Gaston Berger was also a philosopher and an industrialist, with an interest in science. 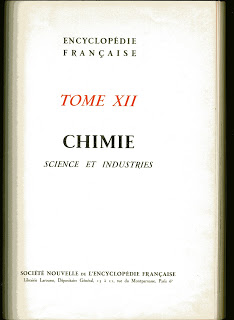 Exactly 50 years ago he wrote some ideas on science and industry in his Prologue to the Volume CHEMISTRY – Science and Industry, of the French Encyclopedia. They are as valid today as in 1958.
About the difference between the natural sciences: «It is naive to believe that sciences can be distinguished from each other by the nature of their objects. Setting boundaries between the areas covered by one or another discipline is as futile and ineffective as the efforts of diplomats intending to fix limits to the areas of influence… Science is original in the way that those who dedicate themselves to it consider the phenomena by the position they adopt, by the nature of the relationships they withhold. The atom of the physicist is not more different from the atom of the chemist than the chemist’s adrenaline is different from the adrenaline of a biologist. Similarly the tree that is being watched by a lumberjack, a painter and a botanist is the same tree, but some and the others put it in different contexts, they confer on it different «values», all of them will not use it in the same way. «
And about the industry in relation to man: «In the industry, everything refers to man. The products it creates meet his needs. Manufacturing requires his work. The problem is to produce the largest number of satisfactions with the least possible tiredness. This is tantamount to get the best performance. It is easy to measure and compare the performances using monetary signs. But these signs are only meaningful through the joy and pain of men «
Two years later, in 1960, a fact occurred that Gaston Berger could not foresee: he died in a car accident…