(From the press release of the World Economic Forum)

• The World Economic Forum today released Global Risks 2010, highlighting a number of underlying risks that contributed to and were exacerbated by the financial crisis and global economic downturn
• Fiscal crises and unemployment, underinvestment in infrastructure – especially in energy and agriculture – and chronic disease are identified as the pivotal areas of risk over the next years
• Other risks identified as equally systemic in nature, and requiring better global governance, are transnational crime and corruption, biodiversity loss and cyber-vulnerability
• Full report and video interview with Sheana Tambourgi, editor of the report and Director and Head of the Global Risk Network at the World Economic Forum, and more at: http://www.weforum.org/grr 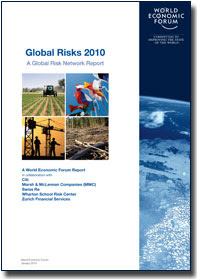 London, United Kingdom, 14 January 2010 – The World Economic Forum today released Global Risks 2010, its annual report on the most significant and underlying global risks facing the global economy this year and beyond. The report argues that the events of the past year have revealed a fundamental need to change thinking on global risks and how they are managed. With unprecedented levels of interconnectedness between all areas of risk, the report stresses that the need to combat governance gaps globally is greater than ever. It argues that this can only be addressed by an overhaul of current values and behaviours by decision-makers to improve coordination and supervision.
Robert Greenhill, Managing Director and Chief Business Officer at the World Economic Forum, said Global Risks 2010 underlines the challenges ahead: “The findings of the report confirm that we must face up to the challenges created by these unprecedented levels of interconnectedness between risks. The financial crisis and the ensuing recession have created a more vulnerable environment where unaddressed risks may become tomorrow’s crises.”
Global Risks 2010 highlights the impact of the fiscal crisis and the social and political implications of high unemployment rates in several major economies as key concerns. Notably, the current models for health, education and unemployment protection have been put under severe strain by the fiscal crisis, notwithstanding the longer-term implications of increasing life expectancy

Daniel M Hofmann, group chief economist of Zurich Financial Services said, “The events of the last year have shown that there are underlying risks within the global economy that need to be addressed. In reaction to the financial crisis, many countries have put themselves at risk of overextending their fiscal positions and being burdened with extremely high levels of debt. This could put upward pressure on real interest rates, rein back growth and lead to protracted high levels of unemployment.”