Press release from the WEF: 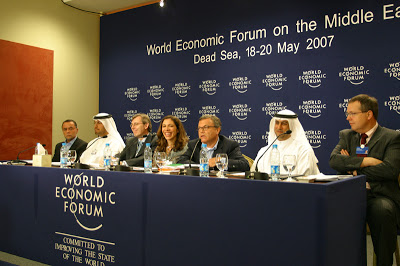 Dead Sea, Jordan, 18 May 2007 – Buoyed by an economic boom and bolstered by oil wealth, the Middle East is enjoying a surge in self-confidence that must be converted urgently into investments in people, particularly the region’s youth, participants concluded at the World Economic Forum on the Middle East.
«We are on the brink of the new Middle East – young, entrepreneurial, empowered,» said Khaldoon Al Mubarak, Chief Executive Officer and Managing Director, Mubadala Development Company, United Arab Emirates. «The social fabric is changing.»
Al Mubarak’s sentiments echoed the optimism that pervaded the meeting, which took place from 18 to 20 May and brought together more than 1,200 participants from 56 countries. Indeed, while the Middle East is still riven by seemingly intractable conflicts, it is simultaneously undergoing a business-led transformation. Many hope this transformation will help to not only reduce the region’s long-standing overdependence on oil revenues, but also help to defuse historic enmities and blunt extremism by creating new opportunities, new jobs and unlocking the region’s potential to innovate and compete in the global economy.
«The Arab world is catching on and becoming part of globalization, finally,» said Fadi Ghandour, President and Chief Executive Officer, Aramex International, Jordan.
Part of this new emphasis on Arab capacity building was manifested at the meeting by the announcement by His Highness, Sheikh Mohammed bin Rashid Al Maktoum, Vice-President and Prime Minister of the United Arab Emirates and Ruler of Dubai that he will create a US$ 10 billion fund to promote human development, investing in education and the development of knowledge in the region. And, at the close of the meeting, Bassem Awadallah, Vice-Chairman of the King Abdullah II Fund for Development, announced the creation of an award for the region’s youth, co-sponsored with the Fiorina Foundation.
But change to the Arab world won’t come as a matter of course. The Middle East has yet to achieve the kind of economic momentum that has made development irreversible in booming economies such as China and Russia, said Sir Martin Sorrell, Group Chief Executive, WPP, United Kingdom. Making sure that it does will require persistence, warned Hans-Paul Bürkner, President and Chief Executive Officer, The Boston Consulting Group, Germany.
Participants emphasized the need for a radical overhaul of education in the Arab world. Education, they agreed, needs to be made more responsive to the needs of the modern global workplace. Educational systems must help imbue the next generation with a greater sense of risk taking and entrepreneurship, a willingness to learn from failure and tolerate failure in others. It must instil a sense of meritocracy and citizenship. «Our education system doesn’t’ teach us enough about the importance of becoming activists within our community,» said Ghandour. «We need to teach our youth early on the values of freedom and activism so when they grow up they don’t go to the other extreme.»
Empowering a new generation of Arabs won’t stop at the classroom, however. Companies have an important role to play in facilitating the evolution of Arab culture and promoting the role of the individual as an innovator and agent in the region’s development. Indeed, overhauling Arab education has as much to do with changing mindsets as it does with changing curricula.
Change, therefore, cannot be left until the next generation emerges from the classroom. The next generation must be involved immediately in crafting the new Arab world. «It’s not enough to just listen to these young leaders,» stressed Klaus Schwab, Founder and Executive Chairman of the World Economic Forum. «We have to integrate those young leaders into decision-making.» 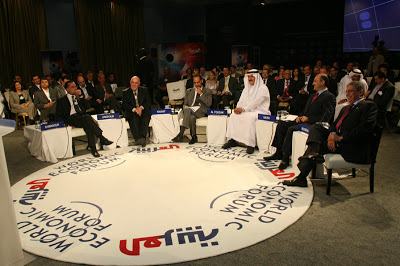 Saeed Al Muntafiq Executive Chairman, Tatweer, and Chairman of the Board, Young Arab Leaders, summed up the mood. «Optimism, urgency and a sense of responsibility are sentiments I walk away with,» he said. «The opportunity is to take this optimism and try to do something about it. Now it is up to the private sector and others to ask how they can contribute.»
The World Economic Forum is an independent international organization committed to improving the state of the world by engaging leaders in partnerships to shape global, regional and industry agendas.
Incorporated as a foundation in 1971, and based in Geneva, Switzerland, the World Economic Forum is impartial and not-for-profit; it is tied to no political, partisan or national interests.
Link: http://www.weforum.org/