With more and more high-school graduates going on to university, governments face tough decisions on funding and quality standards to ensure that their education systems respond adequately to booming demand for degrees. Entry rates to university-level education have risen by nearly one-half on average in OECD countries in the last 10 years, according to the 2008 edition of OECD’s annual report Education at a Glance.
But though the share of public budgets that is devoted to education has also expanded, from an average of 11.9% in 1995 to 13.2% in 2005, funding for tertiary education in many countries is barely keeping up with increased student numbers.


“The challenge facing OECD countries now is to meet growing demand while increasing quality, and that will require not just increased resources but changes in the way money is spent,” OECD Secretary-General Angel Gurría said at a presentation of the report. “OECD countries need to expand their educational resources significantly to meet both fast-growing demand from students who want a higher education degree and growing demand among enterprises for highly skilled youths, and money alone will not do the trick,” he said. “Investments in education will need to become much more efficient too.”

Individual countries have reacted in different ways to the tertiary challenge. While Nordic countries have accepted high public spending on tertiary education as an investment that pays dividends to both individuals and society, others have expanded their university population by making students pay a larger share of the costs.

Still other countries, meanwhile, have neither increased public investments in their universities sufficiently to match increases in student numbers nor allowed universities to charge tuition fees. In addition to creating budgetary difficulties at the level of institutions, this threatens a reduction in the quality of the programmes offered.

The 2008 edition of Education at a Glance contains indicators on a wide range of topics relevant for policy makers. In addition to looking at who participates in education and what is spent on it, it illustrateshow education systems operate and what results are achieved. 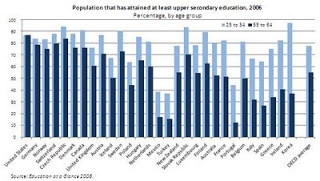 In all OECD countries, earnings for people with higher education qualifications are higher on average than those of people who have merely completed secondary school. In some countries, the earning advantage of getting a tertiary qualification can be relatively slim, but in others it is much higher. Public money still pays the bulk of the costs of tertiary education in most OECD countries. On average, OECD-wide, private funding covers around one quarter of the total bill. But the role of private funding is growing. Average private spending on tertiary education has nearly tripled in OECD countries over the past five years, public spending has risen by only 26%. More than 2.9 million students are enrolled in tertiary institutions outside their countries of citizenship, double the number in 1996 and a 50% increase on 2000. In almost all OECD countries, younger people are better educated than their older compatriots.

Further information on Education at a Glance 2008, in particular briefing notes on: Canada, Finland, France, Italy, Japan, Korea, Mexico, Spain, Sweden, United Kingdom and Brazil can be found at: